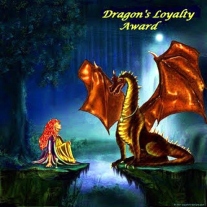 Second on the list of awards I’m catching up on is The Dragon’s Loyalty Award. Admittedly, I haven’t heard of this award before Jess over at JBelkBooks nominated me for it, but I’m so honored that she did! Jess is a wonderful, kind soul with an incredible passion for art. Her blog is a great blend of all of her interests and definitely warrants a visit! Thank you for the nomination, Jess. (:

1. Display the award on your blog
2. Announce your win with a post and link the blogger who awarded you
3.  Present 6 deserving bloggers with the award
4.  Link your awardees in the post and let them know of their being awarded
5. Write seven interesting things about you.

As usual, if you’re not really into doing awards, or if you’ve been nominated for this one already, feel free to ignore this; I just wanted to let y’all know that you’re appreciated! However, if you do end up responding to the award, I let me know. I can’t wait to see what you say!

5 thoughts on “The Dragon’s Loyalty Award”